The existing schools within the Mulberry Schools Trust include Mulberry School for Girls (the founding school), Mulberry Academy Shoreditch, Mulberry University Technical College (UTC) and Mulberry Stepney Green Maths, Computing and Science College. We have a new secondary school, Mulberry Academy London Dock, due to open in Wapping in September 2023. The Trust plans to extend the provision over the next few years and include primary provision. This means we can offer an all-through education for children within our family of schools.

Alongside our growth plans, we are also committed to system-wide improvement and to making a full contribution to the development of a ‘world class’ education system. 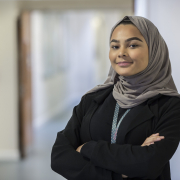 Our aim is to develop creativity, leadership and a life-long love of learning in our students which will enable them to lead enriched, happy and fulfilled lives, making a contribution to their own community, to British society and to global well-being.

Every student will receive an education that:

Bringing Down Barriers to Success

Our shared background in providing for disadvantaged communities has inspired the Trust to build up a broad network of partnerships to aid and develop student experience, opportunity, drive and success. It is our belief that there should be no barriers to each child’s future and that society should, and can, be a level playing field. Aspiring for this to be reality we promise to:

The Mulberry Schools Trust’s corporate and arts partners, such as Bank of America Merrill Lynch, the British Film Institute, the National Theatre, the London Stock Exchange Group, the Donmar Warehouse, the Southbank Centre and others, will all contribute extensively and be central to the wider extra-curricular experiences that the Trust is able to offer to achieve its aims. 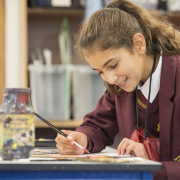 Our vision is to be a key provider for quality education so that all of our students leave us as highly qualified, confident and articulate young people with a wealth of experience.

This vision is under-pinned by moral purpose – a desire to do more to improve the quality of education for all children and young people – and a commitment to schools working together to secure an inclusive, ambitious, collegiate and high quality offer.

A Mulberry education is premised on three under-pinning principles: 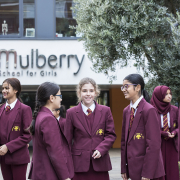 The Mulberry Schools Trust was formed following the 50th anniversary of Mulberry School for Girls in 2014/15, when the Board of trustees and the Chief Executive created a family of schools that has at its heart inclusion, equality of opportunity and a striving for educational excellence.

Mulberry School for Girls, the founding school, is a high achieving, academically focused and successful girls’ school for students aged 11 to 18. Based in the London Borough of Tower Hamlets, it is a place where students are encouraged to develop their ambitions and strive for success.

Since Mulberry School for Girls was designated a National Support School in 2011, we have:

We are proud that our innovative approaches have resulted in significant improvements for the schools involved, improving the life opportunities of thousands of young people.

We have been incredibly fortunate that the success we have achieved has been recognised with visits from some of the world’s most influential and inspiring people: